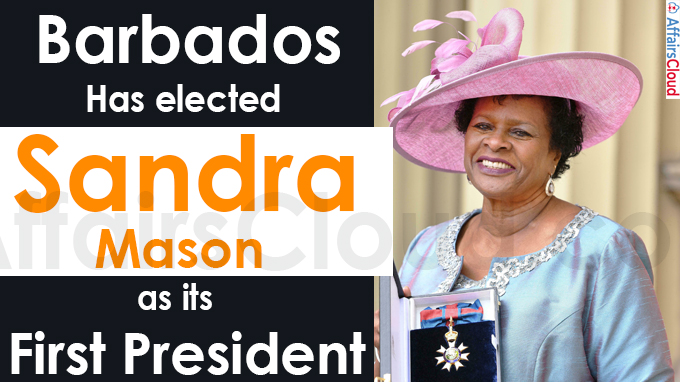 The Governor-General of Barbados, Dame Sandra Prunella Mason, has been elected as the first-ever President of Barbados, a Caribbean island. She will replace Britain’s Queen Elizabeth II as the new head of Barbados.

i.Sandra Mason has been serving as the Governor-General of Barbados since 2018.

ii.She was the first woman to be appointed Appeals Judge on the Barbados Court of Appeals.

iii.She served as the Queen’s Counsel to the Inner Bar of Barbados.

i.Barbados was claimed by the British in 1625.

ii.Barbados has been called “Little England” for its loyalty to the British Customs.

iv.The country which was dependent on sugar exports diversified its economy into tourism and finance.

v.With a population of around 300000, Barbados is one of the most populated Caribbean islands.

i.At present, Queen Elizabeth II is the head of the State of 15 Commonwealth countries (including Barbados) in addition to the United Kingdom(UK).

iii.She is also the head of the Commonwealth, a voluntary association of 54 independent countries.

ii.Former British colonies in the Caribbean that became republics: