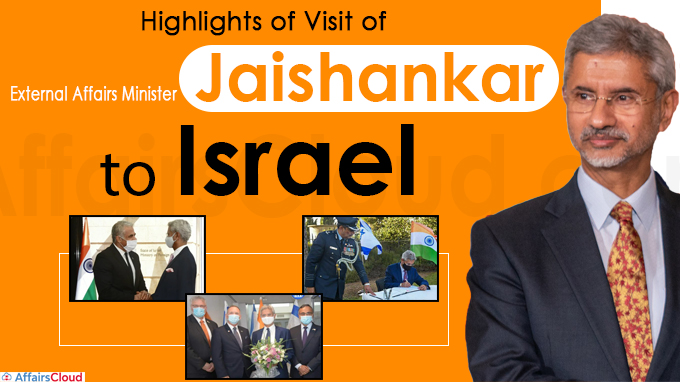 External Affairs Minister (EAM) S. Jaishankar made a 5-day official visit to Israel from 17-21 October 2021 to strengthen the strategic partnership between the two countries. This was S Jaishankar’s 1st visit to Israel as EAM.

i.As a part of the visit, the EAM had a 1st virtual meeting with the foreign minister of Israel, the UAE (United Arab Emirates) and the US (United States) and they have decided to establish an international forum for economic cooperation, which was termed as ‘New QUAD’.

iv.The formation of ‘New QUAD’ will support India to engage more freely with Israel and India’s partners in the Gulf region.

v.The ‘New Quad’ meeting comes on the back of the momentum created by the Abraham Accords.

Note – The 4 ministers planned for an in-person meeting in the coming months at Expo 2020 in Dubai.

He also released a book, “Bombay/Mumbai: City Heritage Walks” by Prof. Shaul Sapir, an India born scholar, who was a Professor at the prestigious Hebrew University of Jerusalem.

Additional Info – In May 2021, India, Israel and the UAE had made their 1st Trilateral cooperation agreement, under which an Israel-based company ‘Ecoppia’ is set to produce robotic solar cleaning technology in India for a project in the United Arab Emirates (UAE). Click here to know more

i.India and Israel agreed to restart both the nations’ Free Trade negotiations from November 2021 and conclude by June 2022.

iii.India and Israel have also agreed to mutually recognise each countries vaccination certificates to ease the travel between the countries (amidst the COVID-19).

Israel’s energy minister Karine Elharrar has officially signed the agreement on Israel’s accession to the ISA in the presence of Israeli Foreign minister Yair Lapid and India’s EAM S Jaishankar.

ii.The EAM paid homage to the cemetery for Indian soldiers who died in the region during World War I in Talpiot, Jerusalem.

i.EAM visited the Indian Hospice in Jerusalem and unveiled a plaque at there to symbolise India’s age-old civilisational connection to the region.