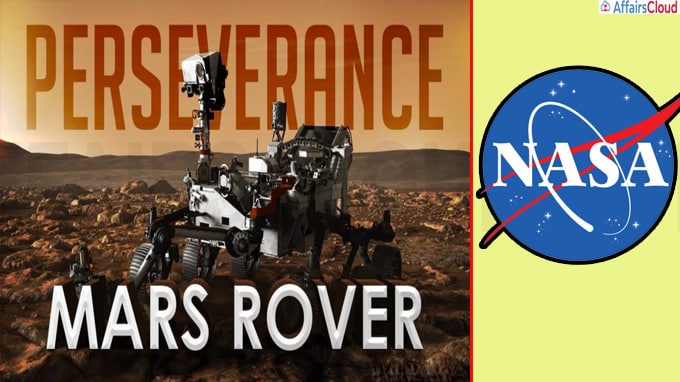 On July 30, 2020, the United States’ (US) 5th Mars Mission “Mars 2020” initiated by NASA (National Aeronautics and Space Administration) after launching  the biggest Mars rover named “Perseverance”, which was lifted off by United Launch Alliance (ULA) Atlas V 541 rocket from Florida’s Cape Canaveral Air Force Station, United States (US). The rover will land on Jezero Crater of Mars on Feb. 18, 2021 with duration of at least one Mars year (about 687 Earth days). The outlay of Mars mission 2020 is around $2.7 billion.

7 Instruments carried by Rover along with 1st ever Spacesuit Material & Helicopter Ingenuity, and Mars Chunk (SaU008)

—Scanning Habitable Environments with Raman & Luminescence for Organics and Chemicals (SHERLOC): It is a spectrometer that will provide fine-scale imaging and uses an ultraviolet (UV) laser to map mineralogy and organic compounds.

—Mastcam-Z: It is an advanced camera system with panoramic and stereoscopic imaging capability with the ability to zoom. .

—SuperCam: It can provide imaging, chemical composition analysis, and mineralogy at a distance.

—Planetary Instrument for X-ray Lithochemistry (PIXL): It is an X-ray fluorescence spectrometer and high-resolution imager to map the fine-scale elemental composition of Martian surface materials.

—Mars Environmental Dynamics Analyzer (MEDA): It a set of sensors that will provide measurements of temperature, wind speed and direction, pressure, relative humidity, and dust size and shape.

—Radar Imager for Mars’ Subsurface Experiment (RIMFAX): It is ground-penetrating radar that will provide centimeter-scale resolution of the geologic structure of the subsurface.

—Spacesuit Material: As NASA is preparing to send the first woman and next man to the Moon, the rover carried the first samples of 5 different spacesuit materials that will be exposed to the brutal high-radiation environment for testing.

—Helicopter: The rover is also carrying a small helicopter named Ingenuity, which aims to be the first aircraft to fly on another planet. It will act as a technology demonstration to test the first powered flight on Mars with duration of one or more flights within 30 days.

Very Important Points to be noted:

–The U.S. is the only country to safely put a spacecraft on Mars’ surface. Two other NASA landers are also operating on Mars viz. 2018’s InSight and 2012’s Curiosity rover.

–Mars has seen 12 landing attempts by the US, of which 8 have led to successful and now seeking its ninth successful landing on the planet.

—So far, four space agencies- NASA, Russia’s Roscosmos, the European Space Agency (ESA), and the Indian Space Research Organization (ISRO), have put spacecraft in Martian orbit. The recently launched Hope and Tianwen-1 missions by UAE and China respectively might join that club if they reach the red planet safely in February 2021.

— In 2026, NASA in collaboration with European Space Agency (ESA) will launch a dune buggy to fetch the rock samples collected by rover, along with a rocket ship that will put the specimens into orbit around Mars. Then another spacecraft will capture the orbiting samples and bring them on Earth.

The Mars 2020 Project is managed for NASA’s Science Mission Directorate, Washington, D.C., by the Jet Propulsion Laboratory (JPL), a division of Caltech in Pasadena, California, US.