Mamata Banerjee-led All India Trinamool Congress has been granted national party status by the Election Commission of India. The party becomes the seventh national political party in India.

About All India Trinamool Congress :

i. The All India Trinamool Congress is an Indian national political party based in West Bengal, Tripura, Manipur and Arunachal Pradesh. Founded on 1 January 1998 as a breakaway faction of the Indian National Congress, the party is led by its founder and current Chief Minister of West BengalMamata Banerjee.

iv. The slogan became very popular in West Bengal at the time of the 2011 assembly election. Later, Mamata Banerjee wrote a Bengali book with the same title.

v. A song was also recorded with the same title to glorify the theme. According to a report published in June 2011, it was one of the six most popular political slogans in India at that time.

vi. After remaining with the INC for over 2 decades, Mamata Banerjee formed her own party, the “Trinamool Congress”, which was registered with the Election Commission of India during mid-December 1997.

vii. The Election Commission allotted to the party an exclusive symbol of Jora Ghas Phul. On 2 September 2016 election commission recognized Aitc is a national political party.

About a National Party : 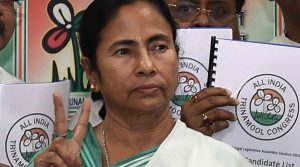