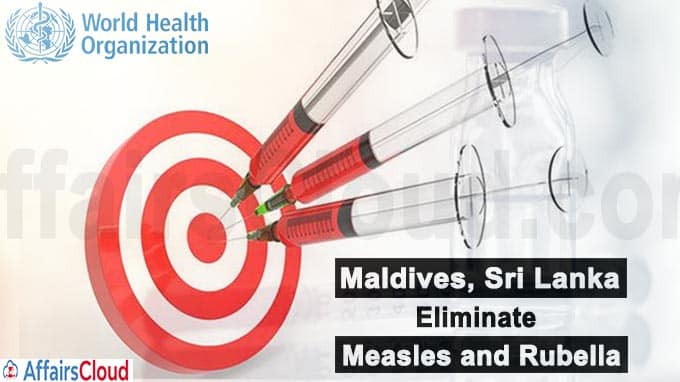 On July 08, 2020, According to the World Health Organisation’s (WHO) South East Asian Region (SEAR) office, Maldives and Sri Lanka were verified to eliminate  both measles and rubella, making them the first two countries in the WHO South-East Asia region to achieve beyond their 2023 target.
This was announced after the 5th meeting of the South-East Asia Regional Verification Commission for Measles and Rubella Elimination, which comprises of 11 independent international experts in the fields of epidemiology, virology and public health, held virtually.

In Maldives measles had last reported in 2009 and rubella in October 2015, on the other hand, Sri Lanka had reported last cases of measles in May 2016 and rubella in March 2017.

500 million children were vaccinated since 2017:

All the 11 member countries (Bangladesh, Bhutan, East Timor, India, Indonesia, Maldives, Myanmar, North Korea, Nepal, Sri Lanka and Thailand) of the South-East Asia region of WHO set year 2023 as a target to fight measles and rubella in September 2019.
Whereas since 2014, the focus was on eradicating measles and controlling rubella and work on it was started.

It is a highly contagious viral disease and is particularly dangerous for children from the economically weaker background, as it attacks malnourished children and those with reduced immunity.
Symptoms: It can cause serious complications, including blindness, encephalitis, severe diarrhoea, ear infection and pneumonia.

It is a contagious, generally mild viral infection that occurs most often in children and young adults. Rubella infection in pregnant women may cause fetal death or congenital defects known as Congenital Rubella Syndrome (CRS), which causes irreversible birth defects.