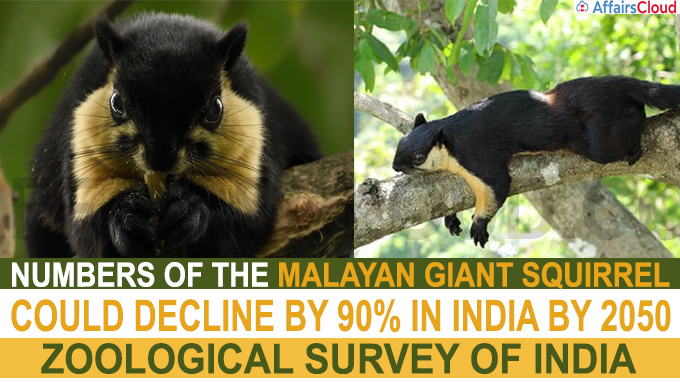 According to a First-of-its-kind survey conducted by Zoological Survey of India (ZSI) under the Ministry of Environment, Forest and Climate Change (MoEFCC), Malayan Giant Squirrel or Black Giant Squirrel (Ratufa bicolor) could fall by 90% in India by 2050 due to shrinking of its original habitat zone.

i.At Present only 43.38% of the Original habitat in  India is favourable for its living. The favourable zone of its habitat may decline to 2.94% by 2050.

ii.This would mean that, by 2050 the habitat of the squirrels will be restricted only to Southern Sikkim and North Bengal.

iii.The squirrel is considered to be an indicator of forest health, the decline in squirrel’s population reflects declining Forest area.

Main causes of shrinking of Habitat:

The study has stated that Deforestation, fragmentation of forests, crop cultivation and over-harvesting of food, illegal trade in wildlife, hunting for consumption, and slash-and-burn jhum cultivation taking place in Northeast is contributing to its shrinking habitat.

i.In India the population of the squirrel has declined by 30% in the last 20 years.

i.The Malayan Giant Squirrel distinctly bicoloured with dark upperparts and pale underparts and has a long, bushy tail and is found in parts of West Bengal, Sikkim, Assam, Arunachal Pradesh, Meghalaya, and Nagaland.

ii.Usually they live in evergreen and semi-evergreen forests and are found from plains to hills at elevations of 50 m to 1, 500 m above sea level.

They are diurnal (active during daytime) & arboreal (tree-dwelling) and herbivores.

i.It is listed as Near Threatened (NT) on the International Union for Conservation of Nature’s (IUCN) 2016 list.

ii.It is a protected species under Schedule II of India’s Wildlife Protection Act, 1972.

i.On 17th May 2020, The Zoological Survey of India (ZSI) updated the checklist of Indian amphibians, a list of 20 species as critically endangered and 35 species as endangered.

ii.In order to raise awareness about endangered species and wildlife in India, National Endangered Species Day is celebrated every year on the 3rd Friday of May.