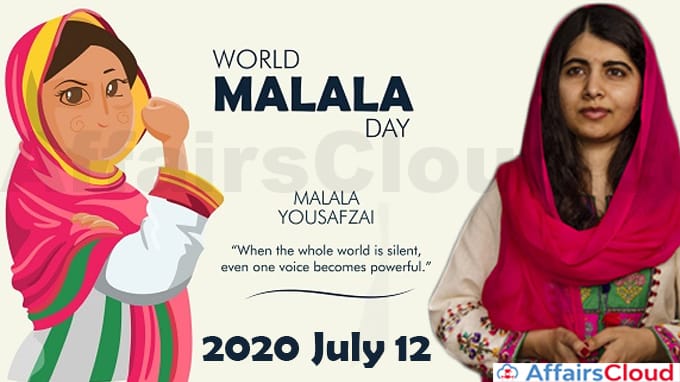 The United Nations(UN) designated 12th July of every year as Malala Day, to commemorate the birthday of Malala Yousafzai, Pakistani activist and the youngest recipient of the Nobel prize for peace. In 2013 first “Malala Day: An Education for All Children” was celebrated. HarperCollins India, documents a book about the challenges faced by 25 brave girls for their right to education.

ii.The United Nations(UN) designated July 12 as Malala Day on 12th July 2013, the 16th Birthday of Malala Yousafzai to honour the courage and determination of the young activist and the rights of women and children all around the world.

ii.Malala with her father founded the Malala funds in 2013 to create awareness about the social and economic impacts of Girls education.

iii.She was appointed as the United Nations Messenger of Peace in April 2017 by the Secretary General António Guterres to create awareness on the importance of girl’s education.

iv.She finished her degree in Philosophy, Politics and Economics at the University of Oxford in June 2020.

i.Malala received the first-ever National Youth Peace Prize by the Pakistan government in 2012.

ii.She became the youngest recipient of the Nobel prize for Peace in December 2014.

iii.The Canada Government awarded her the honorary Canadian Citizenship and became the youngest person to address the House of Commons in Canada.

iv.The United Nations declared her as the most famous teenager in the world in the decade in Review report in 2019.

v.The Documentary “He Named Me Malala” was shortlisted for Oscars in 2015.

The Document of the journey of 25 brave girls:

i.The Publishers of HarperCollins India announced that a book documenting the struggles and fights against the social norms of 25 brave girls for their right to education.

ii.The company has acquired the rights of the anthology compiled by Malala funds.

The book will be released in 2021 and it is yet to be titled.

Features of the book:

i.The book showcases the efforts of the school aged girls to speak out the issues of their community.

ii.The book features the personal essay written by these girls about the fight to gain equality and education.