On February 3, 2020, According to the report titled ‘missing women and children in India’ released by National Crime Records Bureau (NCRB), an Indian government agency responsible for collecting and analyzing crime data.The highest number (33,964) of women who go missing in India are from Maharashtra & the number of missing children are maximum (10, 038) in the State of Madhya Pradesh (MP) in the year 2016, 2017 & 2018. 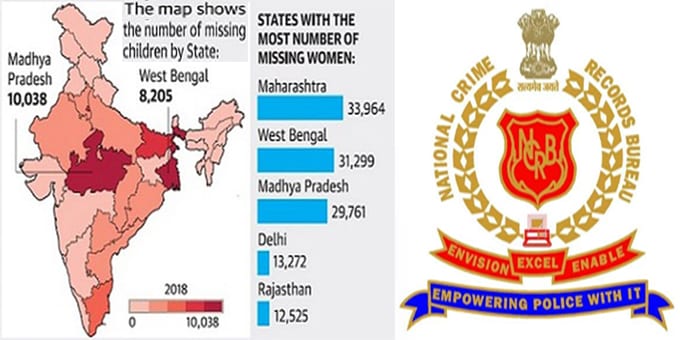 i.In the year 2019, the Supreme Court (SC) had directed NCRB to analyze the data related to the missing persons (especially women and children) to identify the areas to be trafficked.

iii.Missing women data: According to the report, Maharashtra registered the highest number of missing women followed by West Bengal and Madhya Pradesh during 2016, 2017 and 2018.

iv.Missing Children data: The number of missing children are highest in the State of Madhya Pradesh, followed by West Bengal, Delhi and Bihar.

According to this report, the number of missing children in Indore, Madhya Pradesh were 596 and 823 respectively during the year 2017 and 2018.

v.Purpose of releasing data: According to NCRB, the aim of this study is to identify areas where the registered cases of missing persons  are higher than other areas. In some parts of the country that have a high incidence rate, such areas may be sources of child / women trafficking or one of the transit destinations. Knowing about these places will increase efforts to prevent such incidents.