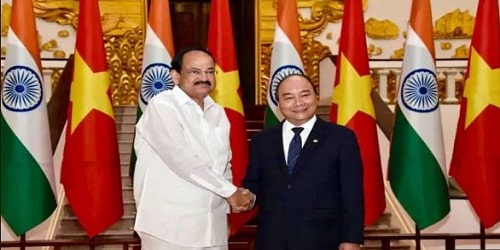 Key Points:
i. M Venkaiah Naidu held talks with the Vietnamese leaders and participated in the 16th United Nations Day of Vesak at Tam Chuc pagoda in Ha Nam, Vietnam’s northern province. This event globally attracted around 10,000 Buddhist followers, 1,500 religious dignitaries, researchers and scientists.
ii. Vesak, considered sacred to Buddhists, is celebrated to commemorate the birth of Buddha, His gaining of enlightenment and his demise.
iii. M Venkaiah Naidu’s participation at the event would strengthen the relation between the Indian and Buddhist communities globally.
iv. After the Vice-President’s arrival in Hanoi, Vietnam’s Capital, he addressed the Indian Community at a reception hosted by the Ambassador of India.
v. He interacted and held delegation-level talks with Dang Thi Ngoc Thinh, the Vice President of Vietnam and met the Chairperson of National Assembly of Vietnam, Mme. Nguyen Kim Thi Ngan.
vi. He also delivered the keynote address at the inaugural session of the event. The theme of the event was “Buddhist Approach to Global Leadership and Shared Responsibilities for Sustainable Societies.”
vii. In the keynote speech, the V.P. (Vice President) brought to notice the fact that, since the last 3 years, a dedicated team of Archaeological Survey of India has been working in Vietnam for the preservation and restoration of the UNESCO World Heritage Site of MySon in Vietnam.
viii. He also notified that the year 2019 celebrates the 90th anniversary of Gurudev Rabindranath Tagore visit to Saigon, Vietnam in 1929, which laid the foundation for the re-engagement of India with Asia in the modern era.
ix. Win Myint, the president of Myanmar, K.P. Sharma Oli, Prime Minister of Nepal and Tashi Dorjee, Chairman of the National Council of Bhutan also participated in it.
x. The Secretary to the Vice President of India, Dr. I.V. Subba Rao, the Secretary (East), Ministry of External Affairs, Smt. Vijay Thakur Singh, the Ambassador of India to Vietnam, Shri P. Harish and other dignitaries from India were present at the event.
xi. Naidu paid tribute to martyrs at the National Monument of Heroes and Martyrs.
xii. M Venkaiah Naidu and his hosts focussed on  broad range of issues, namely:

xiii. Naidu also paid a visit to the Ho Chi Minh Mausoleum, where he paid homage to the late President Ho Chi Minh.
xiv. Naidu also met the Indian community and Vietnamese beneficiaries of the Jaipur Foot Artificial Limb Fitment Camp which was organized in Vietnam under the initiative termed ‘India for Humanity‘. It was launched to celebrate the 150th Birth Anniversary of Mahatma Gandhi.
xv. Naidu met Nguyen Xuan Phuc, the Prime Minister of Vietnam in a separate engagement.
xvi. Vietnam is India’s vital trade partner and in 2018, the bilateral trade amounted to nearly 14$ billion. This value shows doubling from 7.8$ billion before 3 years.
xvii. The Vietnamese leaders notified about the following: