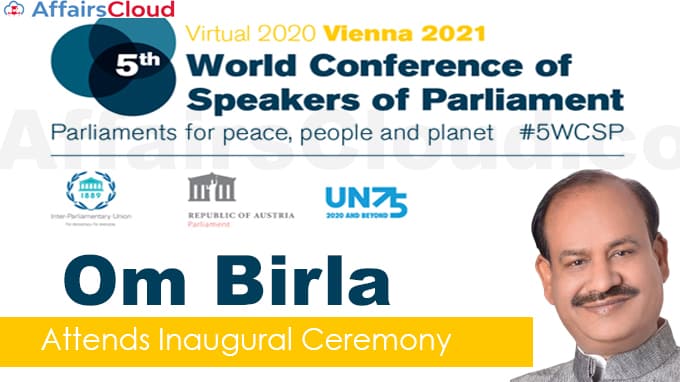 On August 19, 2020, Two-day 5th World Conference of Speakers of Parliament (5WCSP) was inaugurated virtually.It was organised jointly by the Inter-Parliamentary Union (IPU), Geneva and the Parliament of Austria with the support of the United Nations (UN).This is the first time that an International Parliamentary Conference is being held in Virtual mode. Lok Sabha Speaker Om Birla attended the inaugural ceremony.

The theme of the 5WCSP Conference is ‘Parliamentary leadership for more effective multilateralism that delivers peace and sustainable development for the people and planet’.

The Second part will be held in physical mode at Vienna, Austria in 2021.

i.Om Birla expressed his views on the theme ‘Improving Governance by bridging the gap between Parliaments and the People’ during the panel discussion.

ii.The 5WCSP being held in the midst of the Pandemic is expected to strengthen multilateralism and international cooperation to build a better world.

iii.At the end of the conference, an Outcome Document on ‘Improving Governance by bridging the gap between Parliaments and the People’ highlighting the solidarity of the parliaments of the world will be adopted.

i.On 15th July 2020, India and Russia explore to activate joint projects in Asia and Africa in the webinar on “India-Russia Relations in the Context of Post-Pandemic Global order” organised by Russian International Affairs Council (RIAC) and Indian Council of World Affairs (ICWA).