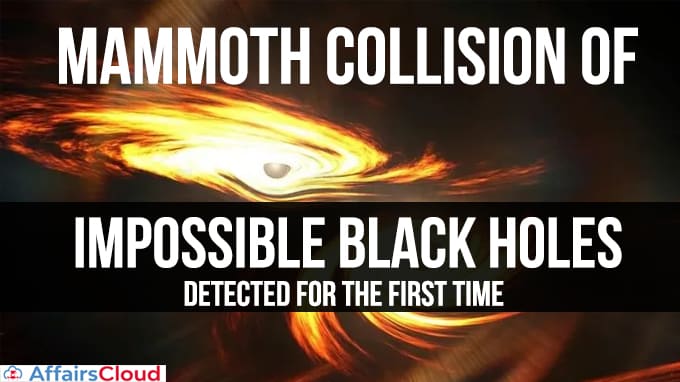 Note–  It is the 1st direct observation of an Intermediate Mass Black Holes(IMBHs) in this mass range.

i.As per the prediction of the astronomers, the  stars between 65 and 130 times the mass of the Sun will undergo a process called pair instability, which results in the star exploding and leaving nothing behind.

When the universe was about 7 billion years old(roughly half its present age), the two black holes merged.

ii.They are lighter than supermassive black holes, often located at the centres of galaxies and heavier than stellar mass black holes

There are various different environments  in which this system of two black holes  may have formed and the disk of gas surrounding a supermassive black hole is certainly one of them.

i.The researchers spotted a Jupiter-like planet, 39 times more massive than the Earth, orbiting around a distant star with temperature lower than the Sun, the planet is located around 730 light years away from Earth. The astronomers named the planet TOI-849b. This is the first ever planetary core to be found by the astronomers.

ii.The Institute for Astronomy at the University of Hawaii’s Asteroid Terrestrial-impact Last Alert System (ATLAS) revealed the discovery of a rare ‘first of its kind’ Trojan asteroid called 2019 LD2 with a comet-like-tail among the Jupiter Trojans, moving in the same orbit as Jupiter moves around the sun.