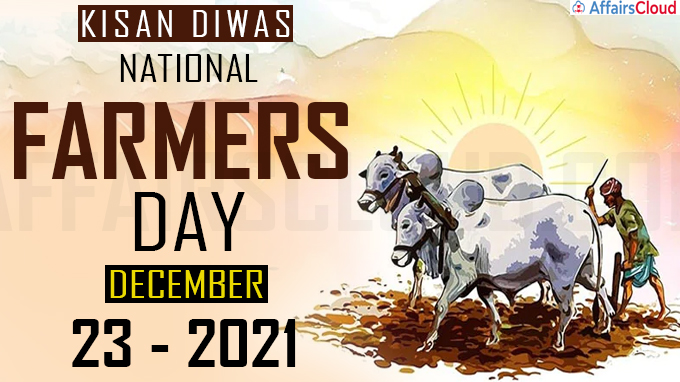 The Kisan Diwas or National Farmers’ Day is annually observed across India on 23rd December to commemorate the birth anniversary of Chaudhary Charan Singh, the 5th Prime Minister(PM) of India (1979-1980). He was born on 23rd December 1902 at Noorpur in Meerut, Uttar Pradesh(UP).

He is popularly known as the “champion of India’s peasants”.

i.In 2001 the government of India has decided to recognise 23rd December, the birth anniversary of Chaudhary Charan Singh, of every year as the National Farmers’ Day to recognise his contributions towards the upliftment of farmers and the development in the agriculture sector

i.Chaudhary Charan Singh, a member of the Indian National Congress(INC), was first elected to the UP Legislative Assembly in 1937 from Chhaprauli and represented the constituency in 1946, 1952, 1962 and 1967.

ii.He served Uttar Pradesh in various capacities such as Minister for Justice and Information and Minister for Revenue and Agriculture and others.

i.He was the chief architect of land reforms in UP.

ii.He also played a major role in the formulation and finalisation of the Debt Redemption Bill in 1939 which brought great relief to rural debtors.

iii.He was also instrumental in bringing about the Land Holding Act 1960, which aimed to lower the ceiling on land holdings to make them uniform throughout the State.