Radhika Menon, who became the first woman in the world to receive the Award for Exceptional Bravery at Sea from the International Maritime Organsiation (IMO) on July 9. 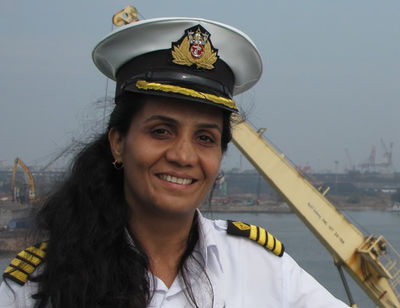 Menon was at the helm of oil tanker ‘Sampurna Swarajya’ of Shipping Corporation of India.
This is not the first time Radhika has proved her mettle. Five years ago, she became the first woman to captain a ship of the Indian Merchant Navy.

This annual Award was established by IMO to provide international recognition for those who, at the risk of losing their own life, perform acts of exceptional bravery, displaying outstanding courage in attempting to save life at sea or in attempting to prevent or mitigate damage to the marine environment.

The International Maritime Organisation (IMO) is the United Nations specialised agency with responsibility for the safety and security of shipping and the prevention of marine pollution by ships.