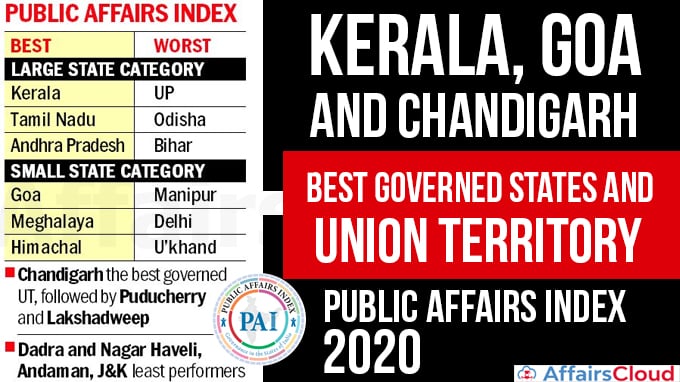 i.The rankings are based on a Composite Index.

i.The report included Delta Analysis in which the results on state performance and ranking measured as the Delta value over the last five years from 2015- 16 to 2019-20 was covered by PAI 2020.

It is based on Equity, Growth and Sustainability.

i.In the Large States Category, in terms of Equity, Bihar followed by West Bengal, Odisha are the top performers, while Kerala, Punjab and Maharashtra feature at the bottom.

ii.In the Small states, Mizoram is the top performer, Goa is placed at the Bottom.

ii.Among small states, Mizoram, Meghalaya have the highest growth with Manipur at the bottom. Himachal ranks 2nd, but has least improvement in Delta value.

ii.Bihar, Gujarat, Maharashtra and Assam are placed at the bottom among the Large States.

iii.Among small states, Goa is the top performer followed by Delhi and Tripura, while Meghalaya and Mizoram feature at the bottom.

i.Female Worker population ratio has a negative relationship with growth, meaning that Gender Disparities are increasing in high performing states.

i.On January 29, 2020, As per the United Nations Development Programme (UNDP) India, India’s youngest state Telangana has emerged as Number 1 state in the ‘Decent work and economic growth’ category with the score of 82 on Sustainable Development Goals (SDG) India index in 2019.

ii.On January 22, 2020, According to the ‘SKOCH State of Governance 2019’ report, Gujarat gained the top spot on the back of better performance in Health, Education, Power and e-Governance segments.