About Naomi van As 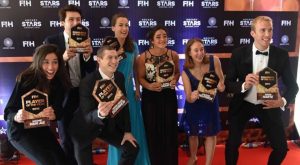 Argentina’s Maria Granatto was named the female Rising Star of the Year after a huge success period which saw her team win the 2016 Hockey Champions Trophy and where she won Best Junior Player.

Coach Karen Brown who guided Great Britain’s women team to gold in Rio was the women’s Coach of the Year award. Brown won the award for the second consecutive year.

Hockey Stars are the annual awards given to the best player, coach, goal-keepers, rising stars and umpire in a given calendar year.