On 8th May 2020, Researchers of Jawaharlal Nehru Centre for Advanced Scientific Research (JNCASR) under the Department of Science and Technology,for security applications, invented an economical and energy efficient wafer-scale photo detector to detect weak scattered light and indicate unwanted activity. 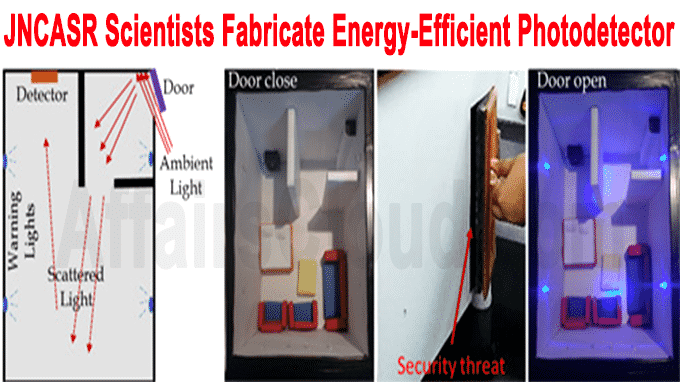 i.The Photo detectors are the core of optoelectronic circuits that can detect light and employ many applications like controlling automatic lighting in supermarkets, detecting radiation from outer galaxies and security related applications.

iii.The inventions by JNCASR scientists are published in the Applied Electronic Materials of the American Chemical Society and provide a cost effective solution based fabrication method for performance photo detectors.

v.The gold-silicon interface was brought by electroplating of metals(galvanic deposition).

vi.The detector has a response of 40 micro seconds and is able to detect low intensity light. The device covers a broad spectral Ultraviolet(UV) to Infrared which is uniform throughout the area with less than 5% variation in response.

vii.The detector is self powered which doesn’t require external power supply with a protective coating and environmental stability of the device under harsh conditions.

viii.The photo detector’s utility was demonstrated by the scientists using a prototype imaging system, lux and power meter and tools for security application.