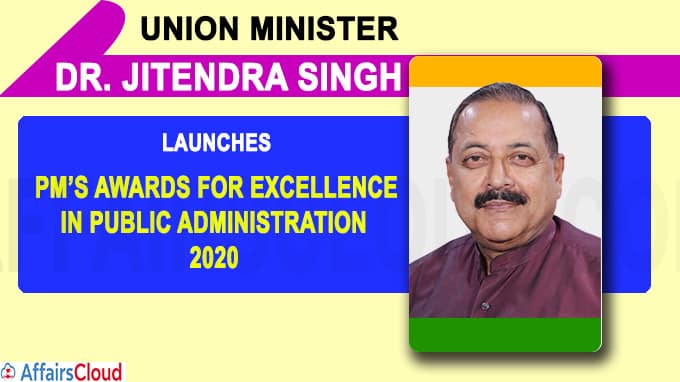 Purpose of restructuring– To recognize the performance of District Collectors towards economic development of the District.

The Government of India has instituted a scheme, “The Prime Minister’s Awards for Excellence in Public Administration” in 2006. The Scheme was restructured in 2014 for recognizing the performance of District Collectors in Priority Programs, Innovations and Aspirational Districts.

About Restructured Scheme in 2020:

ii.The restructure of the scheme for the year 2020 is to recognize the contribution of civil servants in strengthening of:

Total Awards– In total 15 awards will be given under the scheme in 2020.

Distribution of the award– The award will be conferred by the Prime Minister Narendra Modi on Rashtriya Ekta Diwas -October 31, 2020 at the Statue of Unity, Kevadia, Gujarat.

Online applications– The online applications are invited from 17th July till 15th August 2020 through the mentioned portal from Districts / Implementing Units / Organizations under the various categories in the prescribed format.

Key People– In addition to Jitendra singh,  K.Shivaji,  Secretary of Department of Administrative Reforms and Public Grievances(DARPG) and  Department of Pension & Pensioners Welfare(DPPW), V.Srinivas, Additional Secretary DARPG among others participated in the launch.