On December 11, 2019, The Indian Space Research Organisation(ISRO) successfully launched India’s radar imaging earth observation satellite RISAT-2BR1 on board PSLV-C48 (Polar Satellite Launch Vehicle-48) from its spaceport of Sriharikota, Andhra Pradesh. This is the 50th mission of PSLV and also the 75th vehicle mission from Sriharikota. The satellite was lifted from the Satish Dhawan Space Centre (SDSC) at Sriharikota. RISAT-2BR1 was followed by the successful launch of RISAT-2B in May 22, 2019. 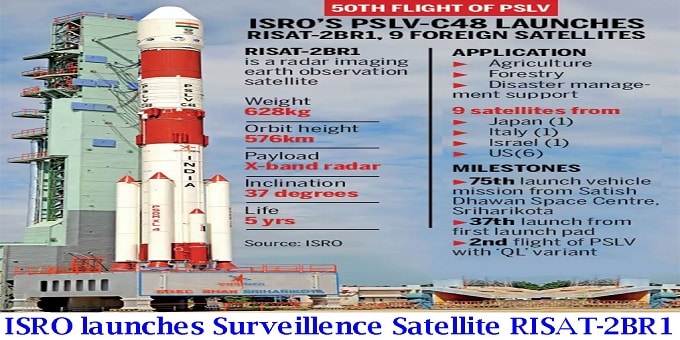 Other satellites carried: 9 other customer satellites which comprises of 6 United States(US) satellites and one each from Israel, Italy, Japan were also launched from Sriharikota.

i.RISAT-2BR1 features: Manufactured by ISRO, the weight of the satellite is 628 kilograms and is meant for applications in fields related to agriculture, forestry and disaster management support etc.

ii.Satellite mission: The mission of the satellite is 5 years and it was launched under a commercial arrangement with the NewSpace India Ltd (NSIL) which is a Public Sector Undertaking(PSU) by the Indian govt.

iii.Israeli satellite Duchifat 3: 3 Israeli students, Alon Abramovich, Meitav Assulin and Shmuel Aviv Levi launched the remote sensing satellite “Duchifat 3” designed and built by them aboard PSLV C48 at Sriharikota. Duchifat 3 is the 3rd series Israeli student-made satellites. The size of the satellite is 10x10x30 cm (3U) and weighs 2.3 kg.