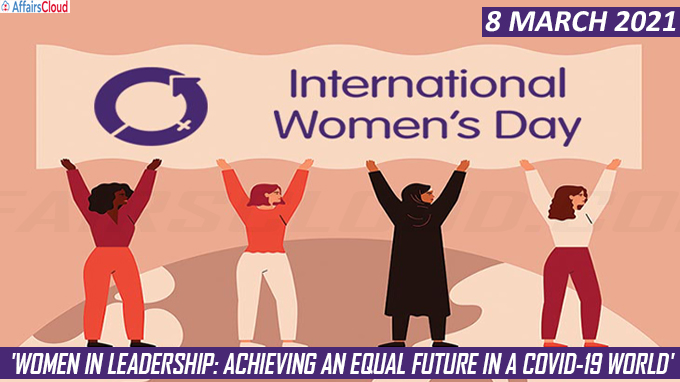 United Nations(UN)’s International Women’s Day (IWD) is annually observed across the globe on 8th March to recognise the achievements of the women regardless of their nation, ethnic, language, culture, economic or political.

The International Women’s Day on 8th March 2021 celebrates the efforts of the women and girls across the globe towards shaping an equal future and recovery from the COVID-19 pandemic.

i.As a part of the peace movement protesting against world war I in 1913, The first International Women’s Day was observed by the Russian Women on the last Sunday of February.

ii.The Russian women again protested for “Bread and Peace” on the last Sunday of February 1917(8th March on Gregorian calendar).

iii.Following which the Czar abdicated and the provisional government granted the right to vote for women.

iv.After World War II, the 8th March was widely observed as the International women’s in many countries.

vi.In December 1977, The United Nations General Assembly(UNGA) adopted the resolution and invited the members to proclaim any day of the year, in accordance with their history, traditions and customs, as United Nations Day for Women’s Rights and International Peace.

i.Russia did not adopt the Gregorian calendar until February 1918.

ii.The 23rd February 1917(Julian calendar) in Russia corresponds to the 8th March (Gregorian Calendar) in the other European countries.

The Grant Thornton, a global accounting firm has published the “Women in Business 2021 Report”.

According to the report,

ii.For the first time in the history of world maritime, a ship with only woman officers was sailed.

iii.This was a part of the diamond jubilee celebration of SCI and the commemoration of the International Women’s Day on 8th March 2021.

i.Two days ahead of the International women’s day The Chatrapati Shivaji Maharaj Terminus in Mumbai, Maharashtra was lit up in pink to celebrate womanhood.

iv.The terminus is an example of the meeting of 2 cultures (British and India), as British architects worked with Indian craftsmen to include the traditions of Indian architecture.