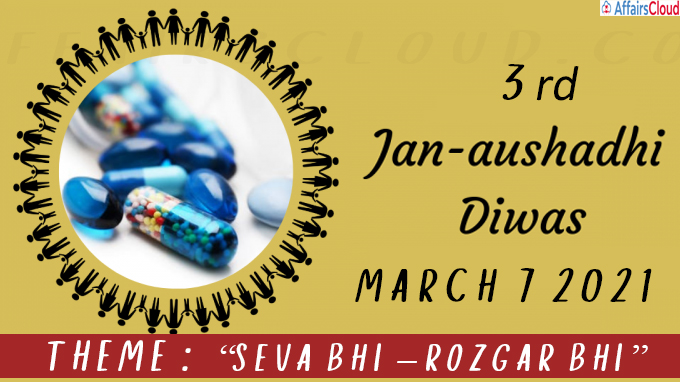 The Janaushadhi Diwas also known as Generic Medicine Day, is annually observed across India on 7th March, the last day of the Janaushadhi Diwas Week (1st March to 7th March). The day aims to disseminate the endeavors of Pradhan Mantri Bhartiya Janaushadhi Pariyojana(PMBJP), an initiative by Department of Pharmaceuticals, Government of India, to provide quality medicine at affordable price.

First week of March (1st March to 7th March) is annually observed as the Janaushadhi Week and the last day of the week 7th March is Celebrated as ‘Janaushadhi Diwas’.

Day 1: Pradhan Mantri Bhartiya Jan Aushadhi Kendras has organised more than 1000 Health Checkup Camps across the country to create general awareness about the price benefits and quality of medicine.

Day 3: Awareness programmes under the theme ‘Teach Them Young’ were organised at Schools, colleges and institutions to create awareness about Jan Aushadhi and Entrepreneurial opportunities offered by PMBJP.

Jan Aushadhi medicines are cheaper by 50% to 90% of average market price.

Day 4: The 4th Day of the week is observed under the theme “Suvidha Se Samman”.  Camp to educate the female students about the usage of Sanitary pads.

Day 5: The 5th Day of the week is observed under the theme “Jan Aushadhi ka Sath”.

The programme was organised to reach out to the senior citizens and create awareness about the availability of the generic medicines at the Jan Aushadhi kendras across India.

Day 6: Awareness events like bike rallies, padyatra and human chain activities were organized to create awareness about the efficacy and potency of the generic medicines.

The Pradhan Mantri Bhartiya Janaushadhi Pariyojana(PMBJP) was launched by the government of India in 2008. The Scheme was first proposed to be implemented during the 11th Five Year plan (2008- 2012).

Objective of the Yojana:

To ensure the availability of quality medicine at affordable prices for all including poor and disadvantaged through Pradhan Mantri Bhartiya Jan Aushadhi Kendras and to reduce the pocket expenses in healthcare.