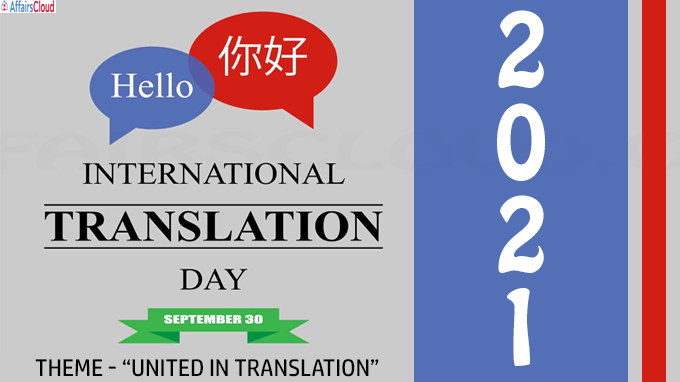 The United Nations(UN)’s International Translation Day is annually observed across the globe on September 30th as a tribute to the language professionals who play a major role in connecting nations through dialogue, understanding and cooperation.

The day also recognises their contribution to fostering world peace and security.

i.The International Translation day was first established by the FIT in 1991 to show solidarity with the worldwide translation community.

ii.On 24th May 2017, The United Nations General Assembly (UNGA) adopted the resolution A/RES/71/288 and proclaimed the 30th September of every year as the International Translation Day.

i.St Jerome, the Latin priest and Doctor of the Church, was well known for his work ‘the Vulgate’ the Latin translation of the Bible.

ii.He translated most of the bible into Latin from the Greek manuscripts of the New Testament and he also translated parts of the Hebrew Gospel into Greek.

iii.He passed away near Bethlehem on 30 September 420.

ii.The UN documents are simultaneously issued in 6 official languages (Arabic, Chinese, English, French, Russian and Spanish) of the UN and some of the core documents are also translated into German.

iii.The Universal Declaration of Human Rights, which has been translated into more than 500 languages, holds the Guinness World Record as the most translated document.

About International Federation of Translators(FIT):