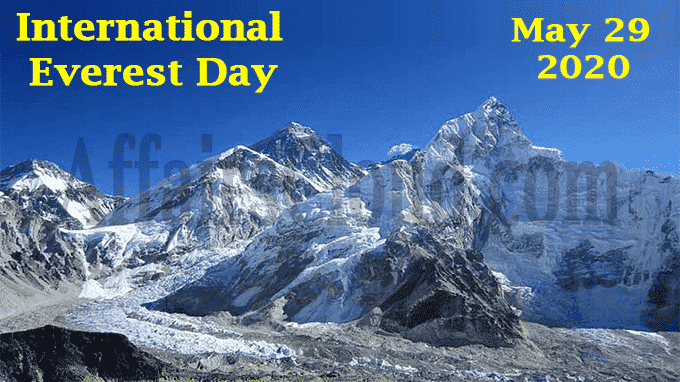 May 29th is observed as the International Everest Day to commemorate the first summit of Mt.Everest by Sir Edmund Hillary of New Zealand and Tenzing Norgay of Nepal in the year 1953.

In 2008, the Government of Nepal made the decision to mark this day as the international Everest Day when Sir Edmund Hillary passed away.

i.In the Biography of Norgay published in 1955, he mentioned that Edmund was the first to set foot on the summit.

ii.The first base camp for the expedition led by John Hunt was in South Col in March 1953.

iii.For their achievement Edmund was knighted by Queen Elizabeth and the George Medal was granted to Tenzing.

i.The International Everest Day is celebrated by organizing special events in the Kathmandu and Everest Region.

ii.Various memorial events and processions will be conducted which is a significant promotional event for the tourism of Nepal. Ministers, climbers, tourists, entrepreneurs, government officials and the general public will participate in these events.