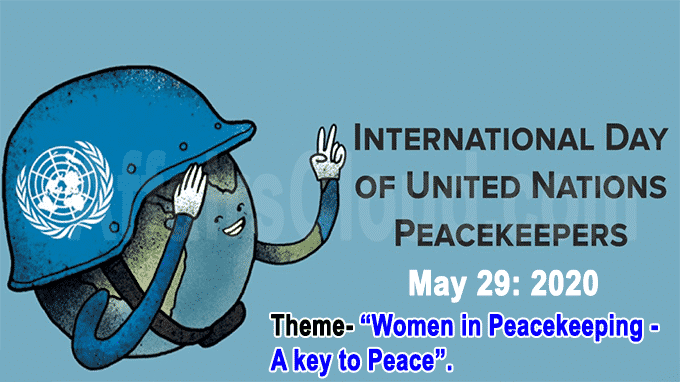 The first UN Peacekeeping mission was established on 29th May 1948 to commemorate this day General Assembly of the United Nations designated May 29th as International Day of United National Peacekeepers in its resolution 57/129 on December 11, 2002 to acknowledge the women and men who serve as military, police and civilians in the UN Peacekeeping. In 2003 the first International Day of UN peacekeepers was observed.

The theme of 2020 International Day of UN Peacekeepers is “Women in Peacekeeping – A key to Peace”.

i.This year marks the 20th anniversary of the adoption of UN Security Council Resolution(UNSCR) 1325 on Women, Peace and Security.

ii.In the COVID-19 pandemic situation the women peacekeepers are fighting in the frontline and implementing the resolutions of Action for peacekeeping(A4P) initiative(expanding the roles of women contribution in the operations including the uniformed peacekeepers).

The digital platform of the United Nations will highlight the contribution of women peacekeepers throughout may, each day, one job held by the woman peacekeepers will be featured to exhibit their roles in peacekeeping.

i.The Secretary General will lay a wreath in honour of the peacemakers who lost their lives at the UN Headquarters in New York and head the virtual ceremony.

ii.The Dag Hammarskjold Medal posthumous award for the 83 peacekeepers who lost their lives in 2019.