The International Day of Peace, also known as World Peace Day, is observed globally by the United Nations (UN) annually on 21st September.

In a resolution sponsored by the United Kingdom and Costa Rica, the United Nations General Assembly declared, the International Day of Peace, to be devoted to commemorating and strengthening the ideals of peace. The date initially chosen was the regular opening day of the annual sessions of the General Assembly, the third Tuesday of September but later in 2001 it was changed to the current annual celebration on 21st September each year.

The day was first celebrated in 1982, and is kept by many nations, political groups, military groups, and peoples. In 2013, for the first time, the Day was dedicated by the Secretary-General of the United Nations to peace education, the key preventive means to reduce war sustainably. 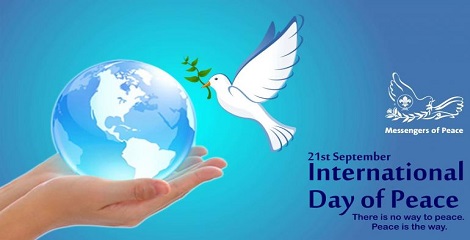 The day is specifically observed for world peace and people across the globe make efforts to free the world from violence and war.

The international community has an unequivocal obligation towards the women, men and children seeking refuge from conflict and violence. The tragic stories and heart-breaking images which we are seeing in the media very often are only the tip of the iceberg – the manifestation of much bigger issues which only can be solved through multilateral cooperation and global leadership as a global crisis requires global solution.

Point to be noted that, in a matter of days, leaders from across the globe will gather at the United Nations to adopt the 2030 Agenda, the 15-year plan to achieve sustainable development.