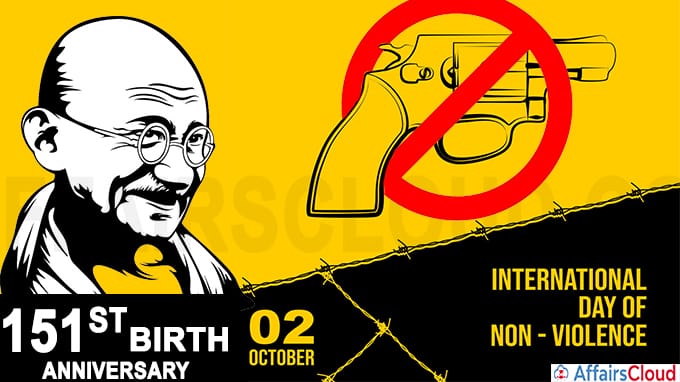 The United Nations(UN) International Day of Non-Violence is observed annually on October 2, the birth anniversary of Mahatma Gandhi, the leader of the Indian independence movement and pioneer of the philosophy and strategy of non-violence. The day is observed to spread the message of non-violence, including  through education and public awareness.

ii.After this, the Satyagraha Conference resolution was passed in New Delhi in January 2007 to adopt the idea of celebrating the day.

iv.The resolution reaffirms the global relevance of the principle of non-violence and the desire to secure a culture of peace, tolerance, understanding and non-violence.

ii.In 2014 on the same day Swachh Bharat Mission was launched by Prime MInister Narendra Modi from Rajghat, New Delhi,. It aims to achieve the vision of a ‘Clean India’ by 2nd October 2019.

Other documents released by Ministry

i.In Order to ensure piped safe water in schools and anganwadi centres across the country, the Ministry of Jal Shakti launched a 100-day campaign under the Jal Jeevan Mission(JJM).

ii.The Public Health Engineering Department of States will spearhead the campaign as a nodal department. This department will involve the Gram Panchayats and/ or its sub-committees, other line departments namely Education, Women & Child Welfare, etc., in the campaign.

The campaign was launched in an event organized by Gujarat government at  Porbander, where Vijay Rupani, Chief Minister of Gujarat declared 4 districts of the State namely, Gandhinagar, Mehsana, Porbandar, and Anand as having 100% household tap water connections coverage.

This event was joined virtually by  Gajendra Singh Shekhawat, Union Minister of Jal Shakti through video conference from Delhi.

Note– Jal Jeevan Mission (JJM) aims at the universal coverage of tap water connection to every rural home by 2024.

In a first, Indian Embassy in Madagascar gets its Solar Power Plant

Indian Embassy in Madagascar gets its 8 KW(KiloWatt) solar power plant  as part of the grand finale of 151st birth anniversary celebrations. With this installation, the Indian embassy in madagascar became the 1st Indian mission globally to become clean and green Embassy with the installation of 8 KW of solar power plant on its rooftop which has been implemented by a Malagasy company Vision Madagascar highlighting the India-Madagascar partnership.

The plant was inaugurated by Christian Ntsay, Prime Minister of Madagascar,Raharinirina Baomiavotse Vahinala, Minister of Environment and Sustainable Development of Madagascar and Indian Ambassador Abhay Kumar.

Indian Embassy gifted Nepal over 41 ambulances and 6 school buses to various governmental and non-governmental, non- profit organizations working in the field of health and education across 30 districts of Nepal.

Note–  Indian embassy every year gifts ambulances and school buses to the government and not for profit institutions to support grassroots medical access.

Indian embassy since 1994 has gifted nearly 823 ambulances including this year’s gift.

Till date, it has gifted 160 school buses across Nepal including this year’s gift.

Under the Swachh Sundar Samudayik Shauchalaya (SSSS) campaign organized from 1st Nov 2019 to 30th April 2020, the awardees are:

Gujarat bagged the first position at state level, Tirunelveli in Tamil Nadu got the Award for cleanliness at District Level.

The block namely, Khachrod, Ujjain, in  Madhya Pradesh was awarded as the best block.

Under Samudayik Shauchalaya Abhiyan (SSA) held from 15th June to 15th Sep 2020, the awardees are:

Gujarat and Uttar Pradesh were awarded as the best performing states.

Haryana and Telangana were awarded the top slot under the Gandagi Mukth Bharat Mission.

Note– Over the last one year, more than 50,000 Community Toilet Complexes (CSCs) were constructed under these campaigns