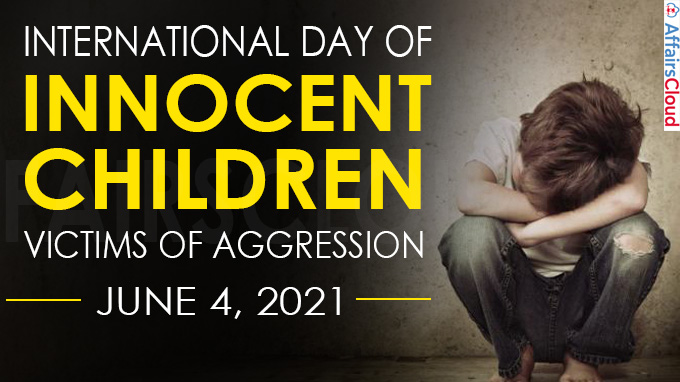 United Nations(UN)’s International Day of Innocent Children Victims of Aggression is annually observed across the globe on 4th June to highlight the UN’s commitment to protect the rights of children. The day acknowledges the sufferings of the children who are the victims of physical, mental and emotional abuse.

i.The United Nations General Assembly(UNGA) adopted the resolution A/RES/ES-7/8 in August 1982 and proclaimed the 4th June of every year as the International Day of Innocent Children Victims of Aggression.

i.The UNGA adopted the resolution A/RES/51/77 on the rights of the Child following the Graça Machel report(1997), which was focused on the impacts of armed conflicts on children.

ii.The efforts of the United Nations to protect the rights of children include the convention on the Rights of the Child and its Optional Protocol and the annual rights of the child resolution.

The 2030 Agenda for Sustainable Development includes a specific target 16.2 to end all forms of violence against children, and ending the abuse, neglect and exploitation of children is mainstreamed across several other violence-related targets.

Wealth of India’s Super-rich decreased by 4.4% in 2020: Credit Suisse Report