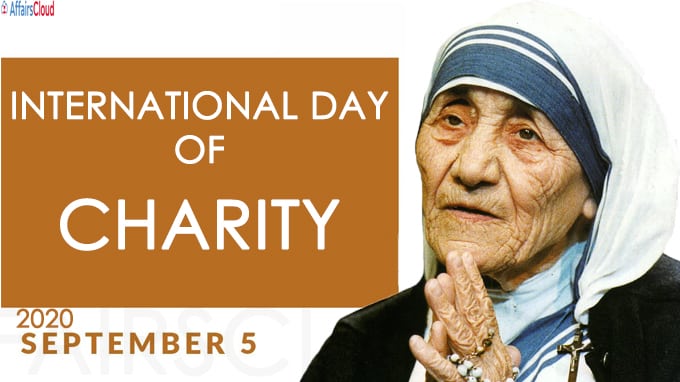 The United Nations'(UN) International Day of Charity is observed annually on September 5, to raise awareness about the role of charity to ease poverty and hunger. September 5 was chosen to commemorate the death anniversary of Mother Teresa of Calcutta(Saint Teresa of Calcutta, Mother Mary Teresa Bojaxhiu), who was the recipient of the Nobel Peace Prize in 1979.

i.The day promotes and recognizes charity, charitable organizations & individuals around the world(including the work of Mother Teresa) whose role have eased humanitarian crises and suffering in the world and have contributed to create more inclusive and resilient societies.

ii.The day also aims to stimulate and mobilize people, Non-Governmental Organizations(NGOs), and stakeholders around the world to help others through volunteer and philanthropic activities.

i.The day was conceived as a Hungarian civil society initiative supported by the Hungarian Parliament and Government in 2011.

ii.The General Assembly of the United Nations in its 58th plenary meeting held in 2012 passed a resolution A/RES/67/105 to designate the day on September 5.

i.Charity has the power to ease the worst effects of humanitarian crises and supplement public services in health care, education, housing and child protection

ii.It has the ability to assist the advancement of culture, science, sports, and the protection of cultural and natural heritage.

iii.It can promote the rights of the marginalized and underprivileged and also spread the message of humanity in conflict situations.

i.Mother Teresa was born(Named – Agnes Gonxha Bojaxhiu) on 26 August 1910 and died on September 5, 1997 at the age of 87. She was born in Skopje (now the capital of North Macedonia), then part of the Kosovo Vilayet of the Ottoman Empire.

ii.She went to India in 1928 and devoted herself to help the destitute. She became an Indian citizen in 1948 and founded the order of Missionaries of Charity in Kolkata (Calcutta) in 1950.

iii.She served the poor, sick, orphaned and dying, for more than 45 years and guided the expansion of the Missionaries of Charity(first in India and then in other countries) including the hospices and homes for the poorest and homeless.

iv.She has been recognized around the world and has received many awards and distinctions, including the Nobel Peace Prize.

ii.International Day for the Fight against Illegal, Unreported and Unregulated Fishing 2020 – June 5