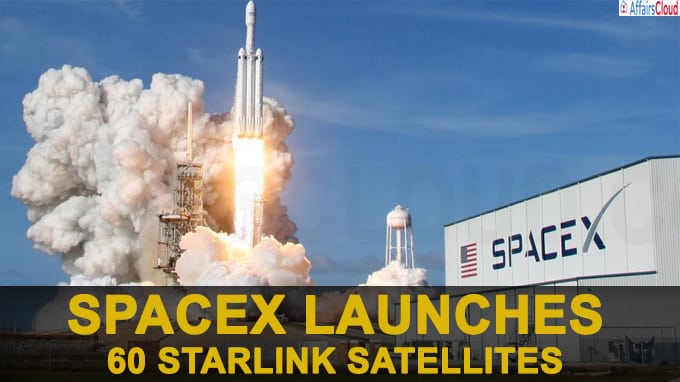 On 3rd September 2020, Falcon 9 of SpaceX, a two stage rocket launched the 12th batch of starlink mission with 60 starlink satellites into orbit. Falcon 9 was launched from the Kennedy Space Center of National Aeronautics and Space Administration(NASA), Florida.

This launch is the first mission of SpaceX in September and 16th Mission in 2020.

Objective of the starlink satellites:

i.To provide cheap and fast global broadband coverage for the people in rural and remote areas.

ii.The satellites launched in the lower orbit will enhance the high speed broadband internet on Earth and increase the internet access in the low coverage area where setting up of on ground towers are difficult.

i.This starlink mission marks the 8th Batch of starlink satellites since May 2019, which makes the total number of satellites in the starlink constellation to 482.

ii.Designated B1060, the booster used in the starlink mission, SpaceX’s newest frequent fliers.

iii.The Falcon 9’s first stage was landed on the “Of Course I Still Love You” droneship in the Atlantic Ocean.

SpaceX targets to prove the initial service to the Northern United States and Canada in 2020 and expand the global coverage by 2021.

NASA astronauts Robert Behnken and Douglas Hurley docked the SpaceX “Dragon” spacecraft with the International Space Station(ISS) on 31st May 2020 at 10.16 am EDT (7.59 p.m India), over the border of China and Mongolia before the ISS started travelling above the Earth’s night side.