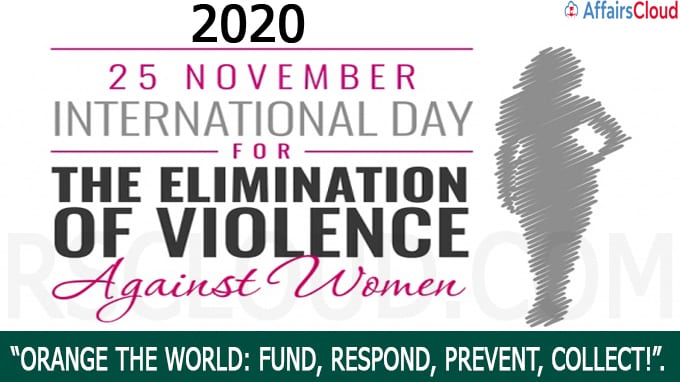 United Nations(UN) International Day for the Elimination of Violence against Women is annually observed around the world on November 25 to raise awareness about the fact that women globally are subject to rape, domestic violence and other forms of violence. The UNiTE by 2030 to End Violence against Women campaign of UN Secretary-General will commemorate the day.

Theme of International Day for the Elimination of Violence against Women 2020– “Orange the World: Fund, Respond, Prevent, Collect!”

16 Days of Activism against Gender-based Violence

ii.This date was selected to honour the Mirabal sisters, three political activists from the Dominican Republic who were brutally murdered in 1960 by order of Rafael Trujillo (1930-1961), the country’s ruler.

iii.General Assembly adoped the Declaration on the Elimination of Violence against Women through resolution 48/104 on December 20, 1993. This pave way to eradicate violence against women and girls worldwide.

iv.The genral assembly adopted resolution 54/134 on February 7, 2000 to designate November 25 as International day for the Elimination of Violence Against Women

Statistics Regarding No. of Women and Girls Abused

i.Globally, 1 in 3 women experience physical or sexual violence mostly by an intimate partner.

ii.Around the world 243 million women and girls were abused by an intimate partner in 2019.

iii.Less than 40% of women who experience violence report it or seek help.

iv.It is to be noted that the calls to violence against women helplines  have increased upto 5 fold in the 1st few weeks of COVID-19 pandemic.

v.An additional 15 million women are expected to be affected by violence, for every 3 months of the continuation of the lockdown.

About UNiTE by 2030 to End Violence against Women campaign:

iii.It aims to prevent and eliminate violence against women and girls.

iv.It focuses to amplify the call for global action to bridge funding gaps, ensure essential services for survivors of violence during the COVID-19 crisis.

v.It also focuses to prevent and to collect data that can improve life-saving services for women and girls.