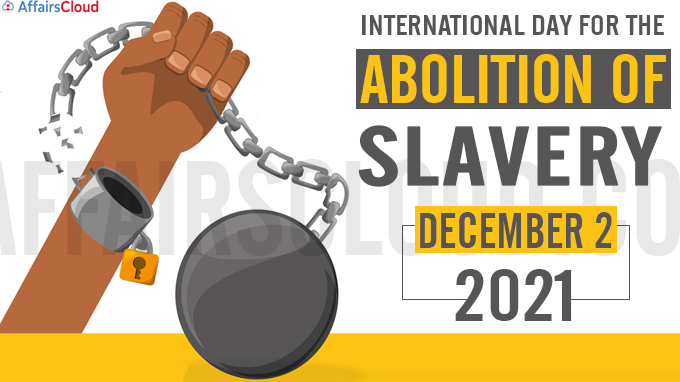 The United Nations(UN)’s International Day for the Abolition of Slavery is annually observed across the globe on 2nd December to eradicate the contemporary forms of slavery which includes, human trafficking, sexual exploitation, child labour, forced marriage, and forced recruitment of children for use in armed conflict.

The International Day for the Abolition of Slavery, 2 December, marks the date on which United Nations General Assembly(UNGA) adopted the resolution A/RES/317(IV) on 2nd December 1949 and approved the United Nations Convention for the Suppression of the Traffic in Persons and of the Exploitation of the Prostitution of Others.

ii.The Forced Labour Protocol is a legally-binding treaty that requires governments to take new measures to tackle forced labour in all its forms.

i.The ILO and Human Resources Without Borders (“Ressources Humaines Sans Frontières”, RHSF) with the support of Cartooning for peace organised an international cartoon competition under the theme “What if your pencil was a tool against forced labour?”

iii.It is defined as the situation of exploitation that a person cannot refuse or leave because of threats, violence, coercion, deception, and/or abuse of power.

i.Around 150 million children, accounting for almost one in ten children around the world, are subject to child labour.

i.Human Trafficking means recruitment, transportation, transfer, harbouring or receipt of persons, by means of the threat or use of force or other forms of coercion.

ILO is the only tripartite U.N. agency created in 1919, as part of the Treaty of Versailles.