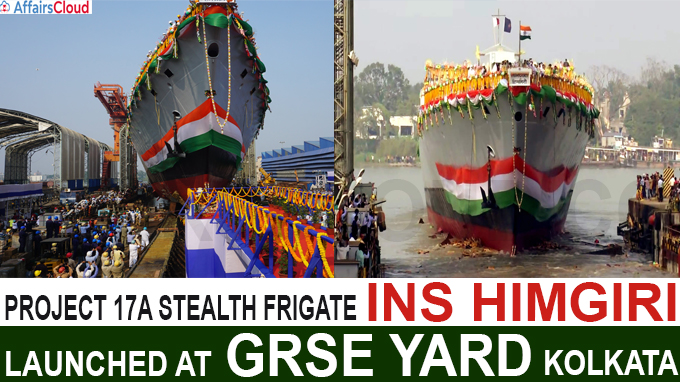 On December 14, 2020, the 2nd ship of Project 17A class of stealth frigates, namely, Indian Naval Ship (INS) Himgiri, built by Garden Reach Shipbuilders & Engineers (GRSE) was launched at its facility in Kolkata (West Bengal). The chief guest of the launch ceremony was General Bipin Rawat, Chief of Defence Staff (CDS) while the INS was launched by spouse of CDS, Smt Madhulika Rawat as a part of the naval traditions.

Project 17A was launched in 2015 by Government of India.The Project 17A program also called Nilgiri class includes a construction of seven ships, four at Mazagon Dock Shipbuilders Limited (MDL) and three ships at GRSE with enhanced stealth features with advanced indigenous weapon and sensor fit among other improvements. It succeeds Project 17 Shivalik-class frigate.

Names of Upcoming INS under Project 17A:

ii.The Myanmar Navy is all set to receive its first submarine namely INS Sindhuvir, a Kilo class submarine which will be handed over by India under its vision of SAGAR (Security And Growth for All in the Region) to provide guaranteed security for all maritime partners.