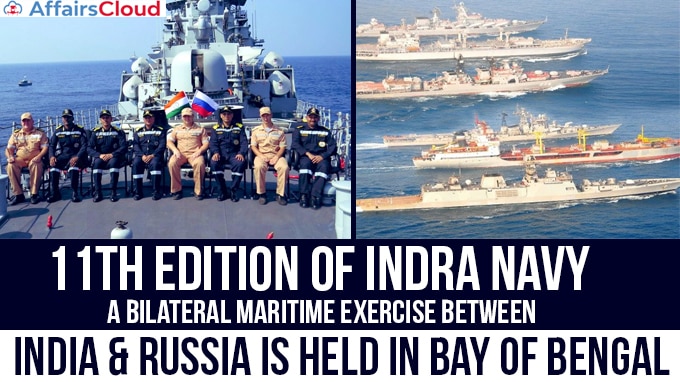 The 11th Edition of bi-annual, bilateral Maritime Exercise INDRA NAVY – 20 between Indian Navy and Russian Navy was conducted successfully from September 4 to 5. The Exercise was conducted in Bay of Bengal, close to the Strategic point of Strait of Malacca. Due to the Pandemic, INDRA NAVY-20 was undertaken in a ‘non-contact, at sea only’ format.

The exercise is aimed at enhancing interoperability, improving understanding and imbibing best practices between the two navies.

The INDRA military exercise has been conducted by India and Russia starting from 2003. The 10th edition of the exercise was conducted off Visakhapatnam in December 2018.

The scope of INDRA NAVY-20 will include wide-ranging and diverse activities across the spectrum of maritime operations.

ii.INS Sahyadri, an indigenous frigate which usually represents India at the INDRA NAVY Exercise has been redeployed to provide assistance to MT New Diamond, which has caught fire off the coast of Sri Lanka.

iv.The Exercise will boost mutual confidence and cooperation between two navies and reinforce the long standing bond of friendship between the two countries.

Point to be noted: –

i.While the exercise was undertaken in Bay of Bengal, Union Minister for Defence, Rajnath Singh who was in Moscow at the time of Exercise, on invitation of Defence Minister of Russian Federation, General Sergei Shoigu discussed bilateral cooperation and issues of mutual interest and commemoration of 75th Anniversary of victory in World War II.

ii.Recently, India had withdrawn its participation from the multilateral War Exercise Kavkaz 2020, at Astrakhan Province of Southern Russia in September, citing Logistics Difficulties due to the Pandemic.