On November 1, 2019, According to data released by the Centre for Monitoring Indian Economy (CMIE), India’s unemployment rate in October 2019 increased to 8.5%, the highest level since August 2016, and up from 7.2% in September 2019.
The report further states that the urban unemployment rate stood at 8.9% in  October 2019 while unemployment figures in rural areas reached 8.3%. 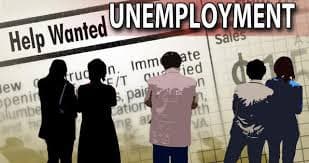 ii.The infrastructure output for the month of September 2019 in India’s contracted 5.2 % on a year-on-year (YoY ) basis, which is one of the worst performances in 14 years by the 8 core infrastructure industries (coal, crude oil, natural gas, refinery products, fertilisers, steel, cement and electricity).

iv.In contrast , the people who are “Not in Labour Force, Education and Training” has continued to increase from about 84 million in 2012& now it crossed 100 million(mn)

v.The report stresses to improve the standard of living, and to reduce poverty, employment opportunities in manufacturing and construction in order to sustain the growth of income.