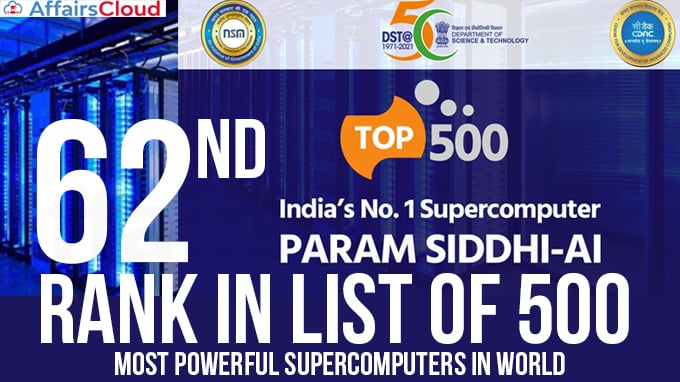 In a non-distributed computer system (co-located), all the components are in a single location.

The Top500 project Rankings are published twice a year. In this list, computers are ranked based on their performance on the LINPACK Benchmark.

Both Pratyush and Mihir are located at two Government Institutes.

i.It was established in 2020 under the National Supercomputer Mission (NSM). It has a Rpeak capacity of 5.267 Petaflops and Rmax capacity of 4.6 Petaflops.

ii.It will be installed in the Centre for Development of Advanced Computing’s (C-DAC) unit, Pune.

iii.It is jointly developed by the Ministry of Electronic & Information Technology and Department of Science & Technology (DST).

ii.It will be used for flood forecasting in major cities like Delhi, Mumbai, Chennai, Patna and Guwahati.

ii.They are used for weather forecasting and climate research in India.

About Ministry of Science and Technology: