On April 10, 2020 The report released by the Government of India (GOI) stated that the fiscal deficit in February was 5.07% of Gross Domestic Product (GDP), making it difficult for the government to meet its revised fiscal deficit target of 3.8% of GDP for FY20. 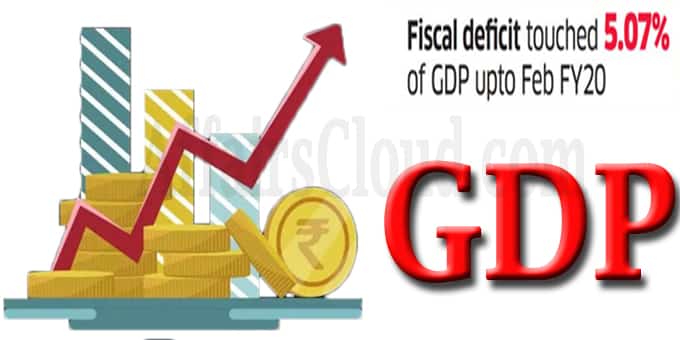 i.According to the Controller General of Accounts (CGA) data, the fiscal deficit has touched Rs 10.36 lakh crore at the end of February.

ii.The government revenues are expected to hit a significant margin in March, & on the other hand, expenditures should rise due to various costs arising from the virus containment efforts and the enforcement of lockdown.

iii.The government recently reduced spending on ministries and departments that are not directly involved in Covid-19 operations to 15% -20% of the budgeted 1st quarter of this fiscal year.

iv.Before the pandemic, Finance Minister Nirmala Sitharaman has increased the fiscal deficit target to Rs 7.66 lakh crore or 3.8% of the GDP by stimulating the escape clause under the Fiscal Responsibility and Budget Management Act (FRBM).

vi.The states received about Rs 90,000 crore as tax devolution for March and around Rs 29,000 crore for various schemes in FY20.

vii.As per the recommendations of the 14th Finance Commission, the Centre also released an additional Rs 1.44 lakh crore to the states for the same period.

Who is CGA?
CGA is a GOI’s principal accounting adviser who is responsible for establishing and maintaining a technically sound management accounting system.It is in the Department of Expenditure under the Ministry of Finance.
24th CGA– Soma Roy Burman ( 1986-batch Indian Civil Accounts Service (ICAS) Officer).