At the Cochin Shipyard Limited CSL, India’s first home made  aircraft carrier INS Vikrant was undocked successfully. A series of fitment  and trial processes combined with series of static and dynamic trials will be made on the aircraft before it is inducted to Indian navy in 2018 end.

INS Vikrant– some facts and features 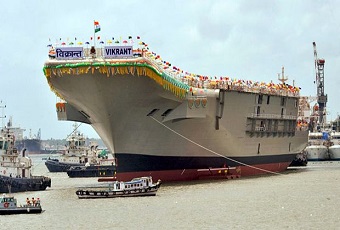