India’s bio-pharma major Biocon Ltd has been ranked among the world’s top 10 employers in the biotechnology industry by an international science magazine.

Biocon Limited is an Indian biopharmaceutical company based in Bangalore, India. The Company manufactures generic active pharmaceutical ingredients (APIs) that are sold in the developed markets of the United States and Europe.

According to a web-based annual survey by the magazine, the city-based company moved to ninth this year from 13 last year in the ‘Science 2016 Top Employer‘ ranking, which is based on firms that are innovative leaders in the industry, are socially responsible and have a clear vision. 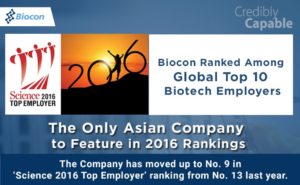