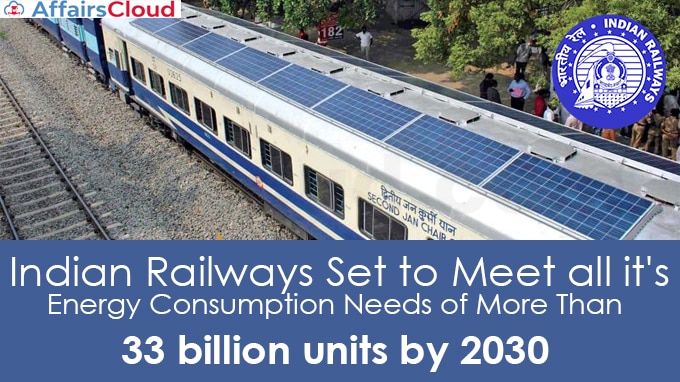 On 27th August 2020, Indian Railways organised a discussion over a wide range of topics with the stakeholders, chaired by Piyush Vedprakash Goyal, Union Minister of Railways, to become 100% self-sustainable for all its energy needs and to contribute to the National Solar Mission of India. Indian Railways is set to meet its energy consumption which will be over 33 billion units by 2030.

The discussion is aimed to achieve the ambitious plan of Indian Railways to achieve 100% Electrification of Railways by 2023.

The current annual energy requirements of Indian Railways are around 21 billion units.

i.Innovative solutions for establishing solar projects along the rail track.

i.Utilisation of solar power will help to achieve the transformation of Indian Railways to Net Zero Carbon Emission Railways by 2030.

ii.Indian Railways is committed to make use of solar energy to meet its traction power requirements and become a complete green mode of transport.

iii.Apart from making green Indian Railways this will also contribute to the Atma Nirbhar bharat mission.

i.Indian Railways has developed a mega plan to install solar power plants of capacity 20 Gigawatt(GW) by utilising vacant lands by 2030.

ii.Indian Railways will extend support to the developers for installing solar power plants in the vacant encroached land.

iii.Developers will construct and maintain the boundary walls along the tracks to keep out the trespassers from the tracks.

Other Project of Indian Railways:

ii.A 3 MW solar plant has been commissioned for a non-traction application at the Modern Coach Factory(MCF) Raebareli, Uttar pradesh.

i.Indian railways created a benchmark by setting a new world history on the successful running of the first Double-decker Container Train with a contact wire of 7.57-metre height on its high reach pantograph in the high rise Over Head Equipment (OHE) electrified territory on the western railway from Palanpur and Botad stations in Gujarat.