Renowned art lover Ismail Mahomed of Indian Origin from South Africa has been conferred with Knighthood by French government. 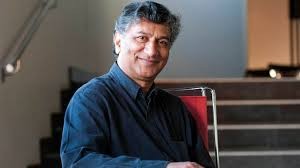 The Order of Arts and Letters: