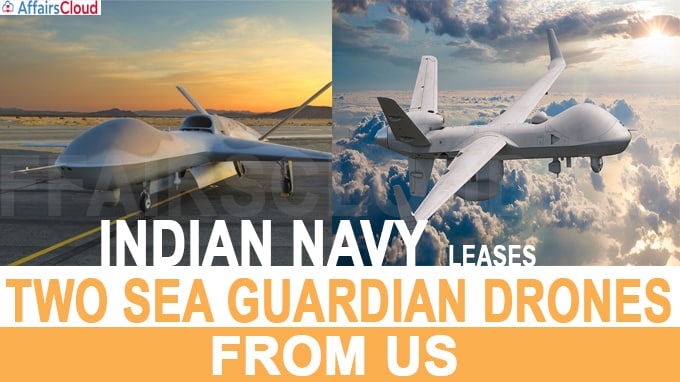 The drones have been leased from an American firm, General Atomics for a period of 1 year for surveillance in the Indian Ocean Region (IOR).

Objective-The drone will help in carrying out surveillance in the Indian Ocean Region.

i.The drones will be flown by Indian Navy personnel and all the data acquired by the Unmanned Aerial Vehicle (UAV) will be the sole property of India.

iii.The drones will be based at Naval Air Station in Rajali, Arakkonam, Tamil Nadu.

iv.The drones can also be deployed for surveillance along India’s land borders along China such as Ladakh.

Note – Already the Navy’s P8I Poseidon aircraft have been deployed in Ladakh.

ii.It has a maximum endurance of 40 hours and a maximum flying altitude of 40, 000 feet.

iii.It is equipped with a 3600 maritime surveillance radar and an optional multimode maritime surface search radar.

i.The navy currently operates a mix of Israeli-built Heron and Searcher UAVs for intelligence-gathering and surveillance.

ii.It has a vast area of responsibility in the IOR spanning millions of square kilometres, with warships deployed from as far as the Persian Gulf to the Strait of Malacca and northern Bay of Bengal to the southeast coast of Africa.