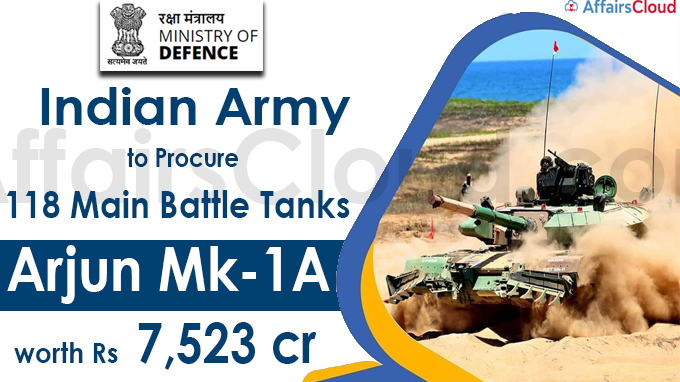 On September 23, 2021, the Heavy Vehicles Factory (HVF) of Avadi, Chennai (Tamil Nadu) grabbed Rs 7,523 crore order from the Ministry of Defence (MoD) for the supply of 118 Main Battle Tanks (MBTs) Arjun Mk-1A for the Indian Army.

It is a new variant of MBT Arjun Tank Mk-1A with 72 new features, more indigenous content, and numerous upgrades.

i.This order will benefit over 200 Indian vendors including MSMEs, with employment opportunities to around 8,000 people.

ii.Notably, MBT Arjun Mk-1A was manufactured in the two period of 2010-2012 after that its trial evaluation was conducted in various phases during 2012-2015.

iii.Five Mk-1A tanks will be delivered within 30 months, followed by 30 tanks every year.

MoD also promulgated a framework for enhanced and synergised utilization of simulators by the three (Army, Navy and Air Force) Services and the Indian Coast Guard (ICG).  This framework envisages transforming simulation-based training across all military domains in effective, efficient and in an economical way.

As part of the 75th Anniversary of India’s Independence, the Ministry of Defence has initiated a project to create the 1st of its kind cyber museum which will honour the war heroes of India. It