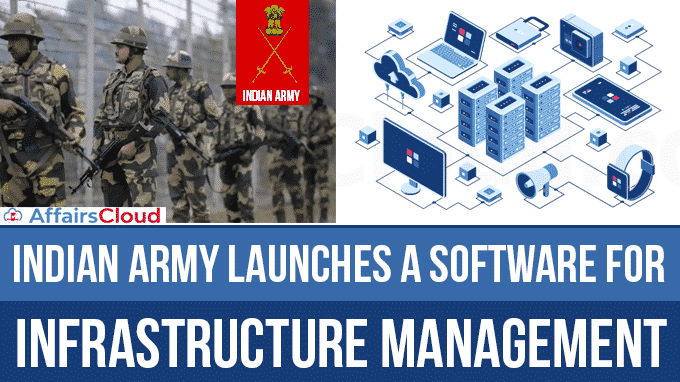 On 29th October, 2020, Indian army launched a software named ‘Infrastructure Management System (IMS)’ for automation of functions related to infrastructure development and management for ascertaining availability of land, planning and monitoring of works, and environment conservation.

The software was inaugurated by Chief of Army Staff (COAS), General Manoj Mukund Naravane during the Army Commanders Conference held on 28th October 2020.

Scope of the Software package:

i.To automate works initiation, preparation of list and its approval by the Ministry of Defence (MoD).

ii.To accord administrative approval and monitoring of execution by Competent Financial Authority (CFA).

Indian Army has developed a simple and secure messaging application named “Secure Application for Internet (SAI)” for providing end to end encryption messaging protocol over the internet. It will be utilized Throughout the Army to facilitate secure messaging within the service.

iii.It has local in-house servers and coding which can be altered as per requirements.

i.On September 15, 2020 The Ministry of Defence cancelled two arms import contracts worth over $2.5 Billion (Approximately Rs. 21,500 Crores), which were in final stages of procurement. The orders will now be placed under the Make in India initiative to give a boost to the domestic industry.