On November 16, 2019 the Strike Corps of the Indian Army(IA) has conducted its second phase of the exercise named Sindu Sudarshan-VII in Jaisalmer-Barmer deserts of Rajasthan from November 12-18, 2019. The aim of the exercise was to evaluate the capability and battle readiness of the defence forces in an integrated air-land battle in a semi-developed terrain of the desert.

The Bhopal-based strike 21 Corps, formed in 1990 and rechristened as the ‘Sudarshan Chakra Corps’ of the southern command, has undertaken this year’s exercise. 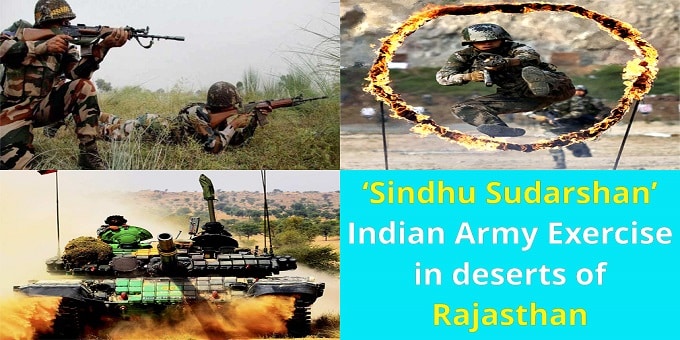 i.40,000 jawans, 700 ‘A’ category vehicles, 300 guns of the Chakra Corps of Southern Command participated in the exercise.

iv.Strike corps: The army’s field forces are grouped into corps. Some of these corps, over the years have acquired the unofficial name called “Holding” while the others are called ‘Strike Corps’. The IA’s principal offensive formations have 3 Strike Corps, they are 1 Corps, 2 Corps and 21 Corps (Sudarshan Chakra Corps).