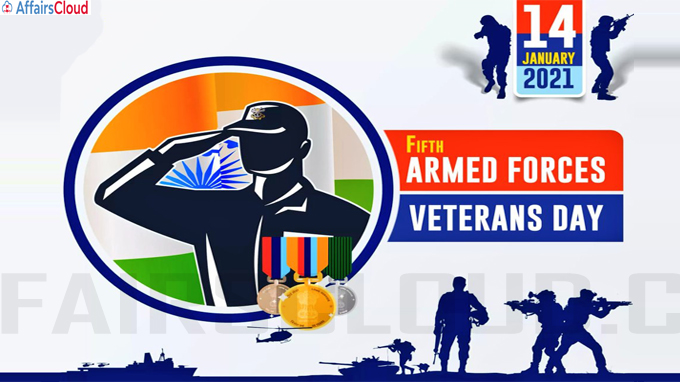 The 14th January 2021 marks the celebration of the 5th Veteran Day by the Indian Armed Forces.

The day honours and recognises the service of Field Marshal KM Cariappa, OBE, the first Commander in Chief of Indian Armed Forces, who retired from the services on 14th January 1953.

i.The wreath laying ceremony was organised at various military stations and the National War Memorial, New Delhi to mark solidarity towards the family of the veterans who sacrificed their lives for the country.

APS DhaulaKuan with Admiral Karambir Singh, Chief of Naval Staff as the Chief Guest of the Veteran meet organised at Raina Auditorium.

iii.The events were attended by the representatives of various ex-servicemen organisations.

i.Admiral Karambir Singh released the “Swarnim Vijay Varsh” song dedicated to the valor and courage of the Indian soldiers during the 1971 war.

ii.The song was written by Kumar Vishwas, composed by Chris Powell and sung by Roomy.