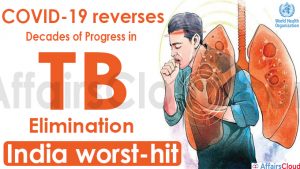 On 14th October 2021, the World Health Organisation (WHO) released the ‘Global TB report’ for 2021, where it highlighted the effects of COVID-19 which led to a huge reversal in the progress of Tuberculosis (TB) elimination. The report also mentioned India as the worst-hit country in TB elimination, where the detection of new TB cases saw a huge impact in 2020.

Note – Lakshadweep is India’s 1st TB free Union Territory, which is inline with India’s target of eliminating TB by 2025.

Similarities in Symptoms of TB & COVID-19 was the biggest player in the disease detection.

A major case cited was the disruption in diagnosis of TB and providing early treatment services. In 2020, there was a 21% reduction in receiving proper service

Increasing the rate of TB diagnosis using either Bacteria culture or Rapid Tests can be a proper step for TB elimination.

World Tuberculosis Day is annually observed by the World Health Organisation (WHO) on 24th March, to create awareness on Tuberculosis.Theme of 2021 – ‘The Clock is Ticking’