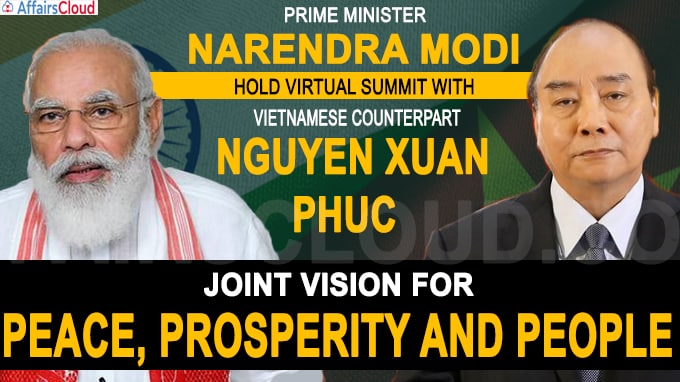 On December 21, 2020, the India-Vietnam Virtual Summit 2020 held which was co-chaired by Prime Minister (PM) Narendra Modi and his Vietnamese counterpart Nguyen Xuan Phuc. It held to review the entire gamut of bilateral relations, and to discuss regional & global issues of mutual interest, including post-pandemic economic revival. Both sides inked 7 MoUs (Memorandum of Understandings) and also set forth the Joint Vision for Peace, Prosperity and People to guide the future development of India – Vietnam Comprehensive Strategic Partnership.

The details for both are given as follows:

An Implementing Arrangement was signed between the Department of Defence Production (DDP), Ministry of Defence (MoD) and General Dept. of Defence Industry, Ministry of National Defence, Vietnam. It envisages a framework for promoting cooperation between the defence industries of the two countries.

A MOU between India’s Atomic Energy Regulatory Board (AERB) and Vietnam Agency for Radiation and Nuclear Safety (VARANS) was also inked to promote mutual cooperation between both entities in the fields of radiation protection and nuclear safety.

To promote cooperation in petroleum research and training, a MoU was signed between Council of Scientific and Industrial Research Indian Institute of Petroleum (CSIR-IIP) and Vietnam Petroleum Institute.

A MoU between National Solar Energy Federation of India (NSEFI) and Vietnam Clean Energy Association was signed to promote exchange of knowledge, best practices, information between solar power industries of both nations and to also to explore new business opportunities.

To promote exchanges in the areas of training and scientific research, health care services, collaboration in diagnosis and treatment for cancer patients, a MoU was inked between Tata Memorial Centre (TMC) and Vietnam National Cancer Hospital.

–Implementation of the High Speed Guard Boat (HSGB) Manufacturing Project for Vietnam Border Guard Command under the US$ 100 million Defence Line of Credit extended by Government of India (GoI) to Vietnam.

–Completion and handing over seven Development Projects with Indian ‘Grant-in-Aid’ Assistance of US$ 1.5 million for the benefit of the local community in Vietnam’s Ninh Thuan province.

–There will be 3 new Development Partnership projects in heritage conservation in Vietnam (F-block of Temple at My Son; Dong Duong Buddhist Monastery in Quang Nam province; and Nhan Cham Tower in Phu Yen province).

–A Launch of bilateral project for preparing an Encyclopedia on India – Vietnam Civilizational and Cultural Relations.

Both nations set forward a Joint Vision for Peace, Prosperity and People to guide the future development of India – Vietnam Comprehensive Strategic Partnership.