India and the US have created a “joint challenge coin” to symbolise their unique partnership in creating a next-generation aircraft carrier for the Indian Navy. 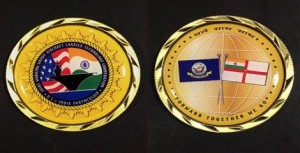 During Obama’s visit to India in January, the two countries had announced the establishment of a working group for a next-generation aircraft carrier to bolster the Indian Navy’s blue-water capabilities, which held its first-ever meeting here last month.