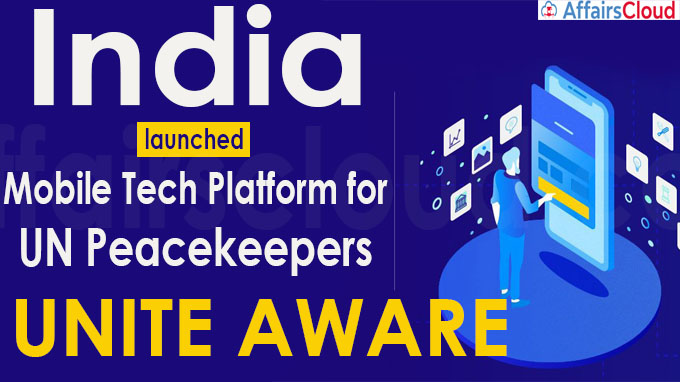 India will launch ‘UNITE AWARE’, a mobile tech platform for the United Nations  Peacekeepers to improve their safety and security in the line of duty. It will be launched during India’s United Nations Security Council (UNSC) Presidency term in August 2021 (Presidency of the UNSC Council is held by each of the members in turn for one month).

i.UNITED AWARE will increase the  situational awareness of the peacekeepers by providing terrain-related information.

ii.India has spent USD 1.64 million for the project and is developing it in partnership with the UN Department of Peacekeeping Operations and Department of Operational Support.

iii.The information about the platform was shared by India’s Deputy Permanent Representative to the UN, Ambassador K Nagaraj Naidu during his virtual address to UNSC Open Debate ‘Peacekeeping Operations: Improving safety and security of peacekeepers’.

The Union Nations Peacekeeping mission began in  1948, it is a role held by the UN’s Department of Peacekeeping Operations (DPO).

i.Peacekeeping force are deployed to maintain or re-establish peace in an area of armed conflict. There are 87, 889 personnel serving in 12 peacekeeping operations around the world (as of March, 2021).

ii.Due to deployment in conflict zones, they face various kinds of malicious attacks including usage of Improvised Explosive Devices (IEDs).