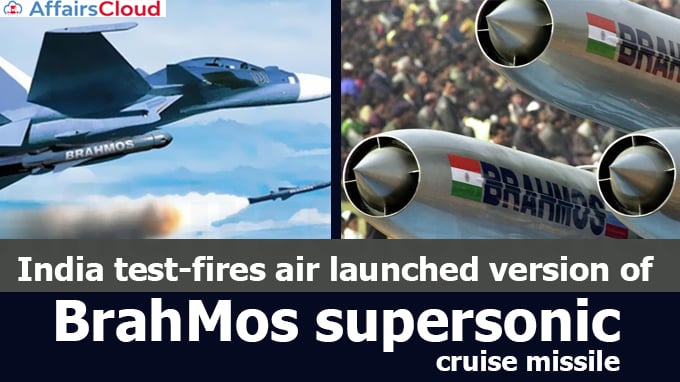 On October 30, 2020, Indian Air Force (IAF) successfully test-fired an air launched version of the BrahMos supersonic cruise missile from a Sukhoi fighter aircraft in the Bay of Bengal. The missile hit the target of the sinking ship with accuracy.

–The BrahMos missile provides the IAF a capability to strike from large stand-off ranges on any target at sea or on land with pinpoint accuracy by day or night and in all weather conditions.

–BrahMos Aerospace, an India-Russian joint venture, produces the supersonic cruise missile that can be launched from submarines, ships, aircraft, or from land platforms.

–On October 18, the first indigenous made anti-radiation missile named Rudram-1 was also successfully test fired. Click here to Read.The Rudram-1 is planned to be inducted into service by 2022.