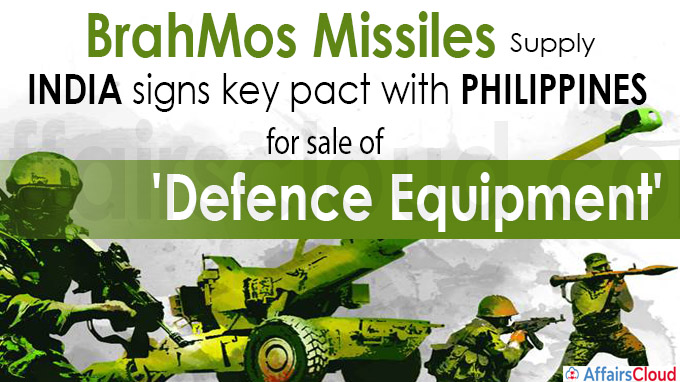 It is a foundational agreement for government-to-government contracts and will serve as a guide for the Philippines and India on policies and procedures in the defence procurement. Under this pact, there is a possible sale of the Indo-Russian BrahMos supersonic cruise missiles to the Philippines.

It is produced by an Indo-Russian joint venture (JV) firm BrahMos Aerospace and it can be launched from submarines, ships, and aircraft or from land platforms. It is a JV between Defence Research and Development Organisation (DRDO) and Russia’s NPO Mashinostroyeniya.

i.In October 2020, a naval version of the BrahMos missile was successfully test-fired from an indigenously-built stealth destroyer of the Indian Navy in the Arabian sea.

ii.After this, Indian Air Force (IAF) test-fired an air-launched version of the BrahMos missile from a Sukhoi fighter aircraft in the Bay of Bengal.

India has already deployed original BrahMos missiles and other key assets in several strategic locations along the LAC (Line of Actual Control) with China in Ladakh and Arunachal Pradesh.

i.On December 1, 2020, India successfully Test Fired the Anti-Ship version of the BrahMos Supersonic Cruise Missile from the Indian Navy’s INS Ranvijay in Andaman & Nicobar Islands Territory. The Missile had a strike range of 300 Kms. It was the first time that the missile was flight tested by 3 Services of the Indian Armed Forces (Army, Air Force & Navy).